Chronotopia is a dance theater re-imagining of the one of the oldest Indian epic poems: the Tamil epic Silappatikaram. Attakkalari’s multi-media dance production is an episodical journey, which explores the movement of five performers through a physical and emotional landscape of contemporary life: birth, love, marriage, war, devastation, death and transformation. Establishing a link, between the landscape and the emotional as well as spiritual mindset of the protagonist, images from ordinary human existence encounter the intervention of inexplicable forces. 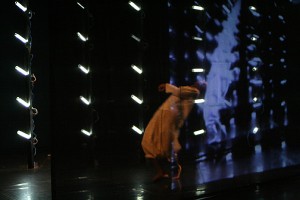 A series of 9 meter tall columns holds a series of 6 Cold Cathode Florescent Lights encased in acrylic cylinders which form a matrix of 36 individually controllable lighting elements. Additionally, three wirelessly controlled CCFL’s are mounted into pedestals which are carried around the stage by the performers and function as sacred objects in the work’s dramaturgical structure. 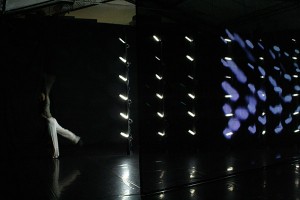 The stage scenographic environment consists of the lighting system in front of which is suspended a large scale, semi translucent projection screen upon which is projected a series of five iconic yet, visually abstract textures. Top and side cameras analyze the flow of motion from the dancers and are used to provide simultaneous input to both the lighting and projection systems. The lighting responds to the performers’ motion by either triggering set patterns, directly coupling with the dancers or creating abstract traces based on different rhythmic and temporal patterns.

The lighting scenography is inspired by both the abstract images of bodily gestures that are prevalent in traditional Indian dance forms such as Bharatnatyam as well as by the ubiquitous appearance of florescent lighting fixtures in everyday life in India.