N-Polytope (After Xenakis) is a spectacular light and sound environment combining cutting edge lighting, lasers, sound, sensing and artificial intelligence software technologies inspired by composer Iannis Xenakis’s radical 1960s-1970s works named “Polytopes” (from the Greek poly, many and topos, space). As large scale, immersive architectural environments that made the indeterminate and chaotic patterns and behavior of natural phenomena experiential through the temporal dynamics of light and the spatial dynamics of sound, the polytopes still to this day are relatively unknown but were far ahead of their time: a major landmark in the history of the audio-visual arts and performative architectural practice.

N-Polytope: Behaviors in Light and Sound After Iannis Xenakis from Chris Salter on Vimeo.

This re-imagining at LABoral runs in both a 25 minute performance as well as a continuously evolving installation mode, both steered through a sensor network utilizing cutting edge machine learning algorithms which learns different rhythmic and temporal patterns produced by the light and sound and helps in generating a totalizing, visceral composition that self organizes in time. 150 10 Watt LED’s and many tiny speakers are suspended through the space on a single ruled surface constructed of thin aircraft cable, creating a walk-through performance environment which continually swings between order and disorder, akin to Xenakis’s original fascination with the behaviors of natural systems. Creating bursts of light as well as evolving patterns, the behavior of the LED’s suggest cosmological events, like the explosion of stars and supernovas. While the LED’s create a changing space of bursting points, colored lasers that bounce off the surface of fixed and changing mirrors generate fleeting architectures of lines and shapes that that appear, flicker and disappear before the visitors’ eyes. Counter-pointing the intense visual scenography, multi-channel audio from the small speakers as well as the larger environment fills the space, shifting between sparse natural and dense electronic textures – noisy bursts, clangerous, gamelan-like lines and percussive explosions of sound. Across the architectural structure, the network of tiny speakers produce the behaviors of mass sonic structures made up of many small elements (sonic grains) creating swarms of tiny sounds that resemble a field of cicadas or masses of insects. 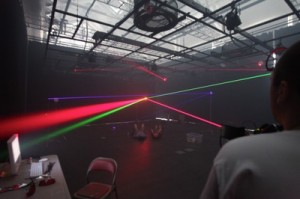 N-Polytope is more than just a historical exercise but instead an attempt to grasp how Xenakis’s’ interest in modeling the behavior and patterns of nature and the cosmos in their exquisite fluctuations between order and disorder more than forty five years ago can still powerfully resonate with our own historical moment of extreme instability in natural and artificial systems creating in our current time a strange, flickering, unstable world of non-human presences constructed of light, sound and space that unfold before us.

With the support of: